The activity of the company MEDICAL PRODUCTION:

- Research and development of prosthetic range intended to oral implantology. These prosthetic elements are designed to fit on the major implant systems on the market.

- Promotion and commercialization of products compatible with all known implant systems, and the services adjoining to their proper use.

- MEDIACL PRODUCTION develops the training of the dental surgeon to the implant technical.

- The coordinating of manufacturing of the operations, storage and product distribution operations.

In 1982, the company SUPERMETAL understands that his industrial and technological future is based on a diametrically different specialization from what was at the time and still is today, the most widespread in the Arve Valley, namely manufacturing hardware.

It is during this period that the new numerical command manufacturing system “citizen” method was introduced. The Company understands that it is then necessary to apply this new technology, and is the first company in the Arve Valley to develop this equipment.

Then she contacted companies in the following industries:

Thus the company has built a solid reputation for reliable and efficient subcontractor in his specialty: precision mechanics. They were rewarded with prestigious awards.

Today it is a company who employs about 80 people.

Among the many manufacturing subcontractor in the medical field (pacemakers, rachis, hand surgery, knee surgery), the company had already produced dental implants. With this experience, the company SUPERMETAL envisaged to create his own line.

In April 1994, the company MEDICAL PRODUCTION was legally constituted.

MEDICAL PRODUCTION had the wisdom and the will to understand the mechanisms that govern the Dental Profession and master as perfectly as possible the technical confines imposed by implantology.

It is for these reasons that it began to manufacture and market universal prosthetic components, that is to say, adapting on implant systems available on the market.

Phase of research and development:

MEDICAL PRODUCTION combines a number of dentists and dental technicians in a Scientific Committee. The recruitment of Engineers Designers, associated with professional guidance group users and technicians of the SUPERMETAL company, allowed to undertake research and lead to the achievements of different product families.

Launch of the prosthetics components to be placed on the main systems distributed on the world market.

Commercialization of Surgical Kit OSSEOBOND, OSSEOBOND of implants and its prosthetics components.

Those products families represent about 800 references.

In parallel with the creation of the products, the company has implemented the recruitment and training of a successful sales team.

- National commercialization with a sales force introduced to the referring practitioners.

- Commercialization in Italy, Spain, Germany, Belgium through selected partners on their perfect knowledge of their market.

- Resumption of MEDICAL PRODUCTION by the financial group ADIGE.

- A factory with 3 Cityzen manufacturing units. 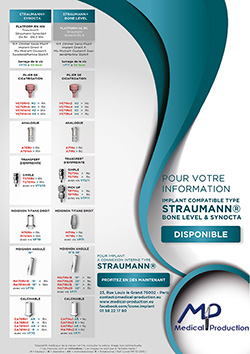 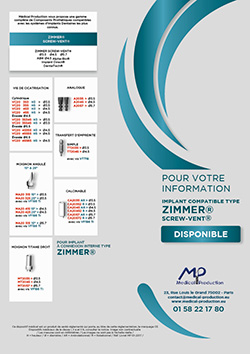